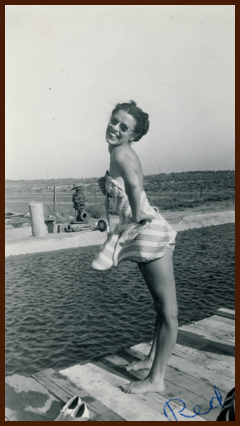 In that busiest of months, April, NaPoWriMo set me to task each morning, but also distracted me from this flow of words. Without comment from me, the first two flashy rhododendron bushes put on their show, the tulips clench and yawn, the plums finish their bloom as the bees gush forth, late and desperate. This brief bee life. I find a mason bee walking along the pavement, no longer capable of lifting itself to a crack in the wall, a hole in the siding, the nest box.

Also unmarked was the 9th anniversary of Dorothy’s death. The time still has that elastic quality, seeming both yesterday and decades ago. In any case, another lifetime. I’ll get back to her, back to the tangle of unfinished sorting, remembering, forgetting. But for the moment the feelings are less acute, less wounding, and I like to think of the times we giggled together, triggering one another over and over, until our stomachs hurt and I nearly peed my pants. Nine years…those last days, that last day and night, staying up all night after, after, after I had gone to see her, gone. Poring over photos, making cards, 1911-2003, printing envelopes, walking them to the mailbox at first light.

I was wounded by what happened earlier, my childhood. But I was also wounded by the long erasure of my time there, in L.A., waiting but not waiting, doing what I could but never enough, shutting myself down to possibility. I was so ready for that chapter to end. Her passing allowed me to close the book without marking the page. This daily practice has allowed me to reopen the book, rediscover the stories, repair the binding.

3 responses to “catching up…”

This site uses Akismet to reduce spam. Learn how your comment data is processed.