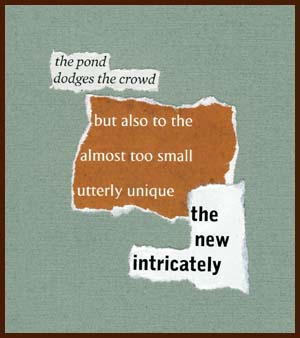 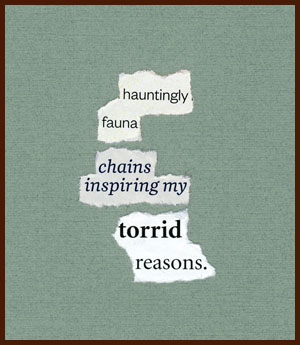 A big-bodied spider has taken up residence in the front corner of the living room, under the edge of the chest. It may be a wolf spider. It was out this morning when I brought in the newspaper, but when I approached with my plastic container to see if I could catch it, it darted back under the chest.

Foiled by the spider, my attention was drawn up and out the window, where a young buck was browsing. I stepped back outside to see that there were two young bucks, brothers, their antlers velvety and perhaps 12 inches tall. They were unperturbed by my watching, nibbling a few bits in my front garden, then moving across the driveway to the neighbor’s more delectable purple clematis. They continued up the sidewalk, their black tails hanging above narrow haunches, their delicate hooves making the faintest tapping on the sidewalk as they strolled and sniffed and browsed their way up the block.

Back in the vegetable garden, where the fava beans and peas and elephant garlic are reaching upward, I see that where the pea vine touches the wire fencing, the leaves are torn and the peas munched.

Outside, the June morning is cloudy, breezy, gray, but through the little window of my mother’s sketch it is always Summer. In her mix of pastel strokes and very fine ink lines, Dorothy captured the light, the season, the ease of Santa Barbara, of her months away from home, away from responsibility, from mothering, from me.

I was three. Every few weeks, my father and I would visit her, making the two-hour drive up Pacific Coast Highway. My father taught me the names of the places we passed — Malibu, Point Mugu, Port Hueneme, Oxnard, Santa Claus Lane, Ventura, Carpinteria — and we would recite them in a sort of game-song-poem, over and over. He told me stories. Once we stopped along the way and he held me in his lap as we slid down a long, steep dune on a flattened cardboard carton. Once we made the trip in a great rumbling airplane — my first plane ride.

Eventually we’d arrive at the place with the blue roofs and we would sit by the pool, or take the wooden footbridge across the train tracks to the beach, or spend a few minutes in the cool dark of my mother’s bungalow, or have hamburgers in the café.

And then it would be time to drive home, the ocean on our right instead of our left, the litany of names unwinding in reverse, the house waiting, quiet and still, for our return.
—–
pastel drawing by DAK 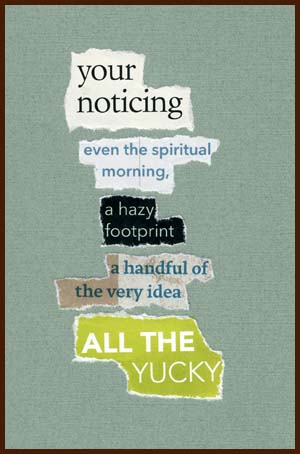 The robin’s voice echoes through the patio, liquid, vivid. The garden is over-ripe, every twig sprung loose, every branch weighted with whatever fruit the season could make. Peas swing and twirl, favas reach up, sweet peas climb. Ivy and buttercups and bindweed battle each other to reclaim the hillside, the fence, the shed, the compost bin. Summer’s bounty.

My father, who had many things to do once he retired, decided in his late 70s that he would, for the first time, grow a vegetable garden. Though he had spent several happy years of his childhood living on a farm, and though he accepted without complaint my mother’s requests for him to dig or prune or lift or repair, he had never shown much interest or initiative when it came to the garden.

But he had become a volunteer with TreePeople, an L.A.-based organization committed to the one-tree-at-a-time greening of the city (and re-greening of burned hillsides), and he reported with wonder his experiences planting trees in blighted neighborhoods and handling sequoia seedlings and watching them grow. If this scrappy non-profit could plant a million trees, surely he could grow a little lettuce.

So, he surveyed his options and selected a square of dirt bounded by a jacaranda tree, the edge of the patio, a hibiscus bush and the railroad ties that held the hillside in place. He worked the soil with the engineer’s diligence he applied to everything he did, and dropped seeds into neatly marked rows. His vegetable garden, he said with some pride, was 1/680th of an acre.

The jacaranda tree blocked the worst of the burning sun, first feathering its delicate shade over the little garden, then coating it with a thick layer of sticky lavender flowers. Aphids colonized the beans. The squirrels and bluejays and snails worked their way through the rows. Even a stray cat took delight in the well-turned soil.

My father witnessed all this with stoic equanimity, and eventually, under his watchful eye, the garden managed to eke out a few small bunches of lettuce and some deformed green beans. But oh, the carrots. The carrots made it all worthwhile, comical to look at but crisp and absolutely sweet as sugar. He savored and shared and beamed over those carrots.

But one season of vegetable gardening was enough, and after that he seemed quite content to return to bigger things. Like sequoias.
—–
photo: my father’s idea of gardening, circa 1957, some three decades before this story 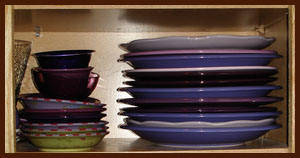 My house is a blonde. When you walk in the front door, what you see is light. She wasn’t always that way. When we met, back in 2005, she was drab and worn, solid and serviceable but in need of a makeover — one of those before-and-after jobs that look so easy in the magazines, where you rarely see what comes between Before and After.

I had a pretty good idea of what I wanted and set-to with determination, cash and a paintbrush. As her personality evolved, I felt a strong call: purple dishes. Having forgotten to get married, I never got my set of regulation dishware. My cabinet has always been filled with an eclectic assortment of thrift shop purchases and family hand-me-downs. So when I got the purple urge, it wasn’t Macy’s or Williams Sonoma that spoke to me, it was Value Village. The mugs were the easiest to find; the bowls the most difficult. The plates and saucers stacked up one by one, the old white and green and blue dishes returning to the donation bin on the next run.

One dish at a time is not the easiest way to buy china. But each time I emerged from the Salvation Army store with a 99-cent purple plate in my hand, I felt the satisfaction of a budget-conscious recycler, the excitement of an archaeologist and the mouth-watering anticipation of meals to come.

They’re lovely in the cabinet, but like any bride’s fine china, they’re most appealing arrayed on the table. Nothing matches. The purples range from the palest lavender to eggplant — lilacs and violets, amethysts and plums.

Each dish holds the secret of its past — the flavors it has known, the hands that have held it — and I imagine I’m populating my kitchen shelves, and my table, with delicious stories the dishwasher can’t drain away. 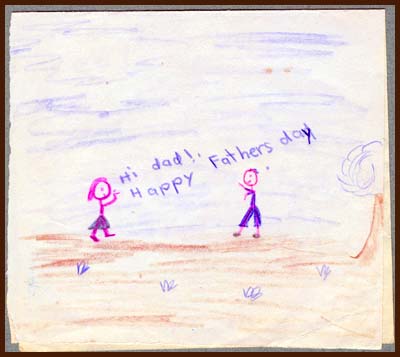 I don’t know how old I was when I made this card for my father, but I love the casual fancy-meeting-you-out-here look of the two waving figures. When I open the card, I’m surprised to see the deep pencil impression of the figures pressed into the paper. With a child’s intensity, I bore down for precision, but once I’d drawn the figures and written the greeting, I used the lightest hand to sketch in the tree and plants and sky and ground and a similar treatment inside the card, in pink.

Beside the correction — it looks like I wrote Fathers dad and then fixed it — and the period after the exclamation point, and the tree set partially out of frame, the detail I love is the girl’s skirt, a neat triangle of silver pencil that still has its metallic brightness after all these years. 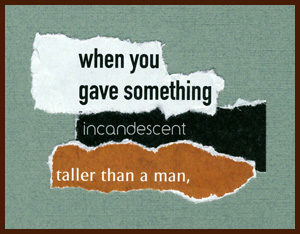 In the evening, we might hear the garage door creak open or thump closed, but usually it was my father’s whistle — low-high-low — that announced his return as he walked up the sloped driveway along the side of the house. Sometimes he’d add a few extra notes to make a little song of it; more often just those three notes marking a change in the day — my mother drying her hands and walking to the front door to greet him with a kiss, I, coming along the hallway from my room for a hug.

Then the pieces of the evening would tumble into place: his nap, our dinner, cleaning up, retreating to our separate work — woodcarving, reading, homework — then bed. And after the settling creaks of the floorboards, the next thing I’d hear would be my father’s voice, calling softly at my bedroom door to wake me up, his made-up sing-song names — Toodle-Poodle, Schnutzi-Putzi — crooned into the dark until I spoke a word or two to let him know I was awake.

…Those sounds bookending our days, morning and evening, year after year.

Concordance of the unknown…I ~ 6, much earlier…

Sometimes, when her father was traveling and her mother and Frieda were napping on Frieda’s narrow bed and all the boys were busy with the horses or mill work, Irene would set down her towel and steal silently to her father’s bureau to peer into the narrow mirror that hung there above the basin and pitcher. In its walnut frame, the mirror had a faintly brassy cast and showed black lines in the reflective surface. It was her father’s shaving glass and it was the only mirror in the house.

The face that looked back at her was wide and plain, the thin hair pulled back from her brow, fuzzy wisps curling where they escaped. She had none of her mother’s concentrated beauty — not her coffee-dark eyes or her thick, chestnut hair — and Irene knew that when her father called her “my lovely,” he was wanting of her some favor, some task, teasing her out from the crowded field of her brothers.

She had many things to occupy her hands and mind and time, but, at 16, she found herself wondering whether anyone might ever find her truly lovely. Standing before the mirror, one finger tracing the narrow contours of her lips, the darkened circles beneath her eyes, she thought perhaps not. 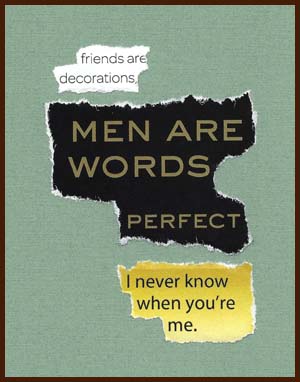