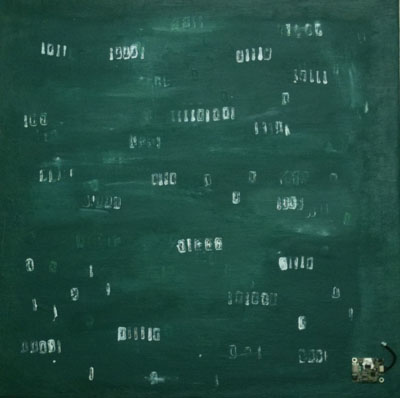 Each morning, there were smudges on the chalkboard, indecipherable scrawls, blooms of dusty chalk, as her dreams escaped, rushing away ahead of her awakening. Rarely, a shard of sound or the image of a word lingered or returned to her unbidden later in the day.

She had been such a good dreamer, remembering, recording the tableaus that unfolded each night in the theater of her sleep. But now, even the pen and paper at her bedside, the words of encouragement she spoke to herself before sleep, had little effect. What had changed? Some chemistry of the body? Some artifact of aging? A subtle shift in the patterns of her sleeping or waking? She saw it as a failing, a weakness, a disappointment, this unremembering.

She wanted her dreams. She wanted the image and sound and texture of them to loiter in her memory. She held the chalk, ready to chronicle their return.
—–
Binary Chalkboard painting by Ruki Oygar