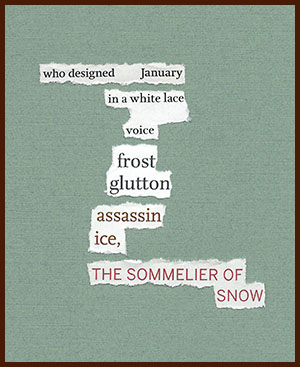 It’s trying to snow, but the sky is lazy, the ground dusted white, the air sprinkled with barely tangible flakes. In the gray light, the greens are darkened to nearly black and the golden evergreens (juniper, hinoki) look jaundiced and burnt.
Still, there are moments of grace: cotoneaster stripped of everything but its brilliant red berries, pink-budded dwarf pieris and elkhorn cypress (Thujopsis dolobrata) nodding neighbors, chickadees hopping among the bare branches of the crabapple. 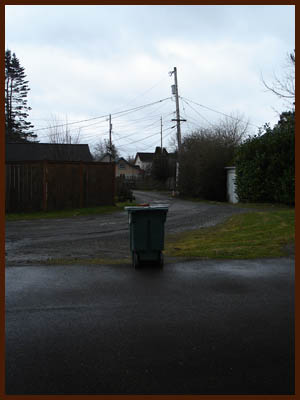 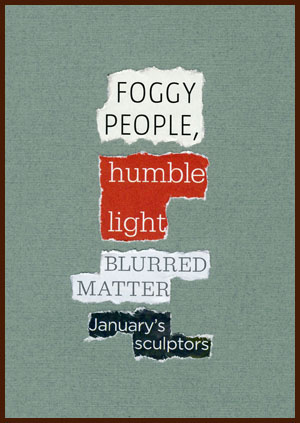 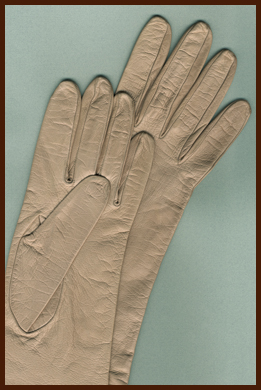 The heater clicked once and roared to life. She had propped open the furnace room door to let the trapped heat radiate out into the chilly room. It wasn’t too bad. Her hands were warm, for the moment. She still carried the stored heat of the night’s sleep. It would wear off soon enough though, the room’s 63 degrees feeling like too few.

But before she’d notch up the thermostat, a degree at a time, she’d try other measures, not understanding her stubbornness. Wooly socks. Slippers. Two sweaters. She’d tried those gloves, rough gray wool, no fingertips, but they hadn’t worked. Too bulky for the keyboard. She needed some kid gloves, or silk maybe, without fingertips. She thought of taking the scissors to the kid gloves that had belonged to her mother. But the idea of lopping off the gloves’ soft fingertips was as painful as if there were already fingers in them. This would have to be a new pair of gloves, one without sentiment, bought for the purpose.

Those and the coat she had imagined, fashioned from an electric blanket. She could see it so clearly: the dark brown wool, the wires like veins, the satin trim at the collar, the extension cord trailing away behind her.

Then, feeling a gloss of perspiration gathering on her upper lip, she realized she could write herself warm.

I hear a thump on the patio window where nothing should be thumping and discover a chickadee, flapping desperately around the enclosed space. It probably sought a moment’s respite in the narrow slot on top of the swinging door into the back yard, then turned left instead of right. I open the big door; the bird flits away.

It’s not snowing, just blowing. White gusts from the northeast sweep up billows of the night’s powdery snow. Rhododendrons and daphne leaves clutch tight and dark, a junco hops in the plum tree. In this mild, benign place of rain and green, islands and Salish Sea, this is our hurricane, our flood. It rivets us, like the crashed cruise ship in Italy, and we become sudden fans of weather, snow, historic records, predictions. We discuss microclimates. We quote Cliff Mass. We close early, cancel meetings. We worry about the people who live outdoors, about our friends with travel plans. We worry about frozen pipes. We eye the wood pile, wonder about the etiquette of shoveling the sidewalk, look more frequently than usual out the window.

We forget, for the moment, the enormous swaths of the planet that live with this and worse for six months of the year. Places where 20 degrees is balmy.

We are dazzled by the spotlight of headlines shining on us, by the concerned calls and e-mails, by the gorgeous snow-globe photos populating Facebook.

Then we check the thermostat, have another slurp of coffee and get down to the day’s work.
—–
coastal radar image

Overnight, a little snow added to what was left of yesterday’s and this morning everything looks pretty, sugared, frosted. The holiday and snow conspire to discourage all but urgent car travel, and the urban sledders, snowshoers and cross-country skiers have the street mostly to themselves.

The snow is coming down, confused by a light breeze. Near the house, the flakes seem almost to hit the window, then turn and lift, hover and finally land.

A flock of tiny birds, perhaps 30 of them, flutters into the plum tree to peck at the snowless undersides of the branches, each little bird hanging, hopping, pecking upside-down until someone gives the signal and they dart away to their next snack, a scatter of silhouettes against the pale gray sky.

the third Sunday in January…

Having dawdled away most of the morning, I glance out the window, where winter’s first snow is floating down in fat, moist flakes. 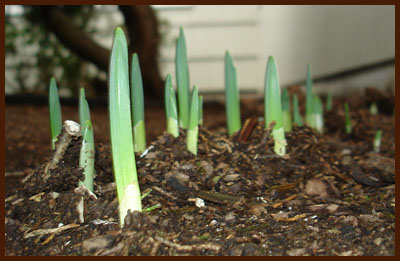 I wander out into the morning chill, distressed to see how little winter work I’ve done in the garden. Apple trees to prune, a tangle of peonies and horseradish to dig, and everywhere the innocent-looking rosettes of new weeds that will too soon send up flower stalks and cast their seeds by the million.

Mt. Baker, peeking over the foothills handsome and white, reports more than 239 inches of snow, but here in the lowlands the ground is saturated, the daffodils are pushing up and one of the plum trees is covered with mustard-seed-size buds.

It’s a tease, of course, and late-season snow or wind may deliver a harsh comeuppance to the flowers tempted into early bloom. But still, in these very short, dark days, the garden seems to say, ‘There’s hope. Spring will come.’

Clotted, ragged clouds drift north to join a thick storm that waits there, low and black. A trio of gulls in silhouette wheels once and follows. Suddenly, and for perhaps three or four minutes, peachy-pink glows through every torn cloud, up onto a fleecy scarf and far south onto its trailing fringe. Then the color bleaches and fades, leaving no trace, and the clouds slow and thicken, their gray bellies scraping the hilltops, brushed by birds, tickled by trees.

A night of wind and rain, wakening from sleep to gusts and clatter, roar and lash. Every window wet, plants drenched and weighted, morning sky an even gray, soil black. Even with the blinds open full, the wan light cannot push itself into the room, dribbles weakly onto the window sill.

The weight of rain-soaked sleep muffles my thoughts. Coffee barely penetrates the gloom.

A lover, hibernation lures me into the waiting oblivion of its embrace…

‘It looks like January out there,’ he says,
‘except for the green.’
This false January’s new coat
a thick quilting of every verdant hue
from chartreuse to near-black.