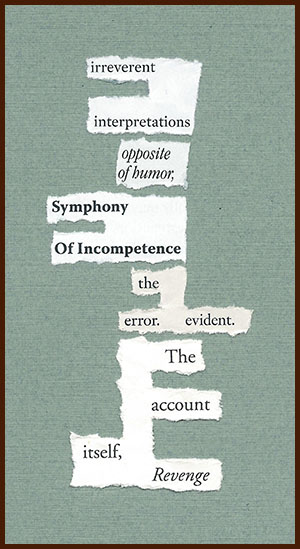 “What would you do?” Laura asked Paul.
“Do? You mean if I wanted to kill myself?”
“Um-hmm.”
“I don’t know, Dr. Kevorkian, is this a multiple-choice question?”
“Yes, of course it is. But seriously, haven’t you ever thought about it? I mean not actually thinking that you would do it, but, you know, just thinking about it?”
“Yeah, I guess. But mostly when it’s in the news — Vince Foster or Kurt Cobain.” Paul was quiet for a moment, then said, “When I was a teenager I was pretty pissed off for a while and used to think that I would kill myself and really show my parents what small-minded tyrants they had been. It was always a gun — just a neat hole in the temple — and my father would barge into my room screaming at me for some petty infraction of the rules and there I’d be, on the bed, cold and dead. And he’d collapse and never be the same, and my mother would come in and cradle my lifeless body in her arms and finally have to be pried away. You know, teenage angst. It didn’t come to me in so many words, but even then I could see the difference between wanting to be dead and wanting revenge. I didn’t want to be dead; what I wanted was to put on this drama and watch it unfold and really bask in it and then jump up and say, ‘Just kidding!’ I wanted to hurt them.”
“What changed?” Laura asked.
“When I went to help my uncle rebuild after the tornado. Spent a couple of months swinging a hammer and after that I was different, and my parents seemed different too, though it’s hard to say who really changed. Took my mind off revenge, anyway…”

—–
more fragments from A Bowl of Words