found poem: his was 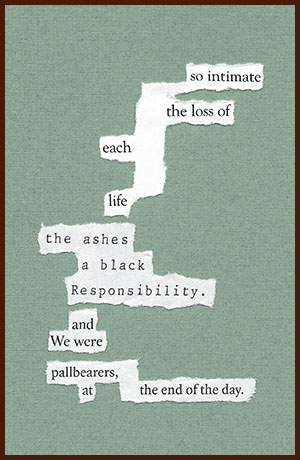 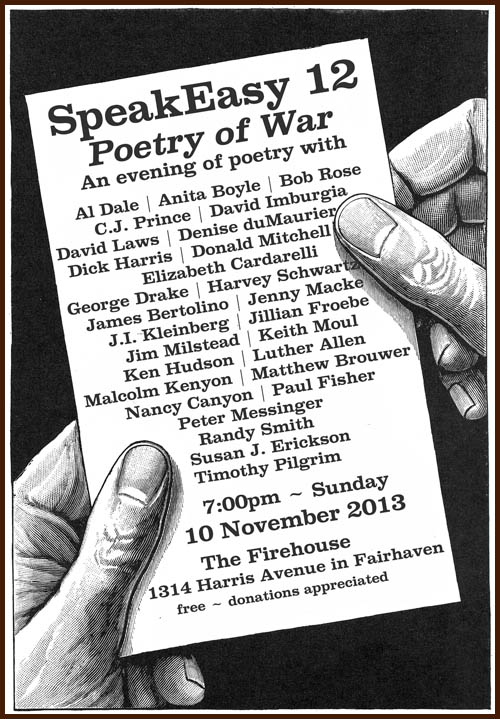 Poets reflect on the experience of war. This evening at the Firehouse Performing Arts Center in Bellingham, Washington. Please join us.

Howard waited for the coffee to soak in. Some mornings he woke up feeling like a dry sponge, shrunken and hard, inflexible, useless. This was one of those mornings. Maybe it was last night’s drinking. Maybe it was the unappealing thought of the work that would accumulate on his desk in drifts during the week he would be out of town. Maybe it was the prospect of sleeping alone another night, another year.

He took a gulp of the black brew and waited, stared unseeing at the newspaper in front of him, listened to the clock ticking on the kitchen wall. He thought about the toy soldiers he had had as a kid. Little dark khaki figures, arms at the ready. A tiny tank. He wondered what had become of them. Imagined a line of them marching off into the fog.

Why am I thinking about toy soldiers I haven’t seen in 30 years or more, he wondered. Then he realized that the front page photo, which he was trying not to see, was of a soldier crouched next to a crumbled wall, weapon raised. If only they were toys, Howard thought. But these flesh and blood fighters were deployed and destroyed as casually as the little plastic men—always men—of his childhood. He wasn’t sure if this was an argument against toy soldiers or a reason to promote the continued, lifelong play with toys that might preclude the need to send children to war generation after generation. War was no way to control the population. He thought of his father telling him about small villages—in Italy? France? he wasn’t sure—that foundered after World War II because none of their men returned. They had to wait for the little boys to grow up.

He refolded the paper with the picture hidden, drank more coffee, waited.